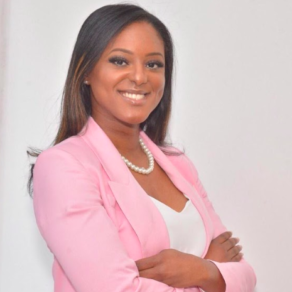 Editor in chief of the Haitian Times

Vania Andre is a first-generation Haitian American media professional, born and raised in New York. Vania has a background in marketing, public relations, and journalism. She’s covered the Haitian community for almost 10 years and has held positions in print, online and broadcast journalism, including NBC and ABC News, where she worked on investigative stories.

As editor in chief of the Haitian Times, one of the oldest publications in the Haitian community and the leading media outlet covering the Haitian Diaspora in the U.S., she is tasked with overseeing the editorial direction of the publication and facilitating key partnerships with community leaders and groups. Under her leadership the publication’s readership and revenue has tripled.

Her previous positions include communications director with the New York City Council where she managed Council Member Jumaane D. Williams’ messaging and communications strategy. She also owns a communications consulting business, where she develops and leads strategy for mainly political campaigns and cultural events.

In April 2016, she received the Excellence in Journalism award from the Society for Haitian Research and was named one of 40 Under 40 by the Star Network.

As an active member of New York’s Haitian political and nonprofit community, she is often asked to sit or moderate panels on issues critical to Haitian and immigrant communities. In April 2016, she moderated the Reporting In Times of Crisis: Telling Migrant Tales through Creative Storytelling panel during the 7th United Nations Alliance of Civilizations forum in Baku, Azerbaijan. She’s also appeared on MSNBC, BBC and WNYC,where she’s given insight and commentary on issues relevant to the Haitian enclaves across the country.