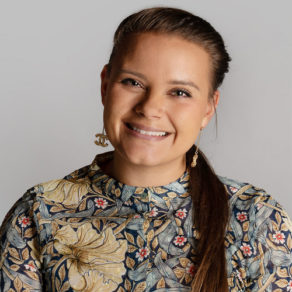 Sandra Moerch is the Chief Content Director at SAP Next-Gen – A Purpose Driven Innovation Community based on SAP’s commitment to the UN Global Goals, a department of which she was a founding team member. In her daily work she is also the Site Manager of the purpose driven 12K SQF innovation space: SAP Leonardo Center in New York City, which is a stage for purpose driven innovation, which plays out in the space every day in the shape of workshops, innovation journeys and evening meetups.

Sandra has always been an entrepreneur and feminist at heart, co-founding numerous tech and retail startups, before she entered the corporate scene with SAP, as well as being an advocate for women’s rights across the 3 continents and 10 countries where she lived. Today, Sandra evangelizes these values as Co-Founder of The Feminist Portfolio, being member at of the Stanford WiDS (Women in Data Science) Committee, as well as being a UN Women Ambassador, in the capacity of sitting on the UN Women Silicon Valley Board, driving programs linked to SAP to bring balance to the force of gender equality in Tech. Sandra was part of founding the #sheinnovates Global Innovation Coalition for Change (The GICC), which involved working across 24 of the most affluent cross-sector brands to create impact at scale. Her work supporting these partnerships includes developing The FQ App: Home of Equality, launching a podcast, hosting numerous events and writing a book.

To Sandra, diversity and imagination are imperative and key ingredients in order to kindle the fires of innovation. As an avid SciFi researcher, Space enthusiast, Childish soul and Design Thinker, she uses imagination as a powerful tool for moon-shooting ideas that have not been thought up yet in our existing landscape, drawing inspiration from the global innovation community. In her role, she has to constantly analyze and research the global landscape of innovation, mapping out the findings in a framework she designed, named The Silicon Valleys of the World, identifying global innovation hubs, and interconnecting them, from Silicon Valley, to Silicon Samba to Silicon Cape, to mention a few. All over the world she shares these concepts to inspire people to enter the impact space, and pick up creative methodologies, integrating them into their core product development and/or job.

Personally she is very ambitious and dedicated girl who loves to have fun with the work, in which she is involved. Design, identity, startups, growth and strategy, and working on more than one project at a time helps her stay inspired.

Family and friends, interior design, nature, cooking and last but not least traveling, are some of Sandra’s great private interests, and she is constantly inspired by other people, different environments and strange cultures, seeking out knowledge!