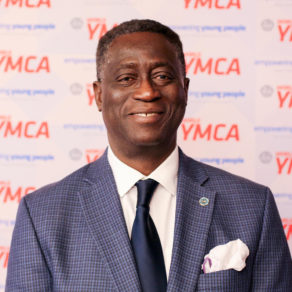 Currently he is General Secretary of the African Alliance of YMCAs, based at its headquarters in Nairobi, Kenya, a role he has held since September 2007. Under his leadership, the African YMCA movement has made great strides in positioning itself as a united continental body focusing on the niche area of youth empowerment in Africa.

He served as Executive Secretary of Finance and Administration at the World Alliance, Geneva, from 1999-2007. Here he was centrally involved in the development of strategic direction of the World Alliance and the subsequent Global Operating Plan, was responsible for the Inter-Movement Support Services ( IMSS) and instrumental in the introduction of a new policy and management of the John R. Mott Fund as well as launching a serious Review of the World Movement Fair Share formula.

Carlos began his journey with the YMCA as a volunteer for the Togo YMCA to recruit new members as part of the revitalisation of the movement. He joined the staff of the Togo YMCA in 1987 as a Leadership Development Secretary, and worked his way up to Deputy General Secretary, in which position he served for five years, before working for the World Alliance.